All cells are surrounded by a lipid bilayer representing a “greasy seal” between the aqueous inside of the cell and the outside. Yet the cells needs to import nutrients, water, ions to sustain their internal metabolism to produce energy and the building blocks required to safeguard and replicate the genetic material and the rest of the cellular infrastructure.

While only a few molecules 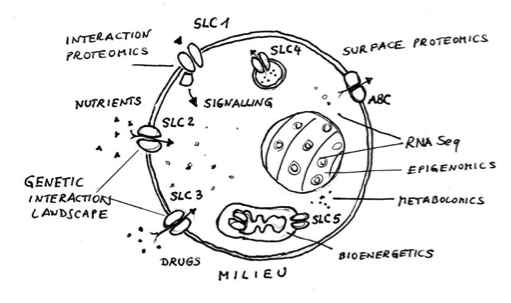 are thought to be able to pass through the lipid membrane surrounding cells, the vast majority of molecules, including vitamins, small molecule hormones, xenobiotics, phytochemicals, pesticides, microbiome metabolites and, importantly, drugs require transporters to enter. The membrane transporters can be thus considered the managers of the interface between chemistry and biology and between organisms and their environment. The Superti-Furga laboratory has recently found transporters of the Solute Carriers group of proteins (SLCs) that are required for cancer drugs to enter cells and exert their activity (Winter et al, Nature Chemical Biology, 2014) and others that are required to couple nutrient availability to growth, in a novel signaling function controlling mTORC1 activity in response to amino acids (Rebsamen et al, Nature 2015).

As they are overall a large and neglected gene family in humans (César-Razquin, Snijder et al, Cell 2015), membrane transporters of the SLC group (and ABC) and their roles in metabolism, drug transport and signaling will be investigated heavily in the laboratory. A better understanding of the transport and signaling specificity of individual SLCs and their concerted circuits may on one hand lead to better targeted drugs and on the other hand pave the way for an understanding of how biological systems are integrated with their environment.